Posted on October 7, 2013 by nameerdavis

Painting madly, writing an exhibition application, and getting used to sharing a house with my parents for the first time in forty years.

The studio cobbled together under house has no walls and bears comments from passersby heading to cars and tools. Recently my young nephew stood behind me as I painted on a stepladder, blew out several times before asking who I was trying to impress. Shared space flows with cross currents, my father passing by sees studio lights as a profligate use of power; mother disturbed by ‘all this black’ , and B’s granddaughter more tellingly wonders at how I can repeatedly paint the same work over and over.

It’s the state of being in between that holds me to the subject and to the process of these paintings. The crowd is a purposeful force that one is a part of or in dispute with. It’s also a collection of individuals, a multitude with no central form or position. Through my studio flow people momentarily forming a commentariat, breaking up into sloughing individuals and, with focused concentration on my part, a surface effect. 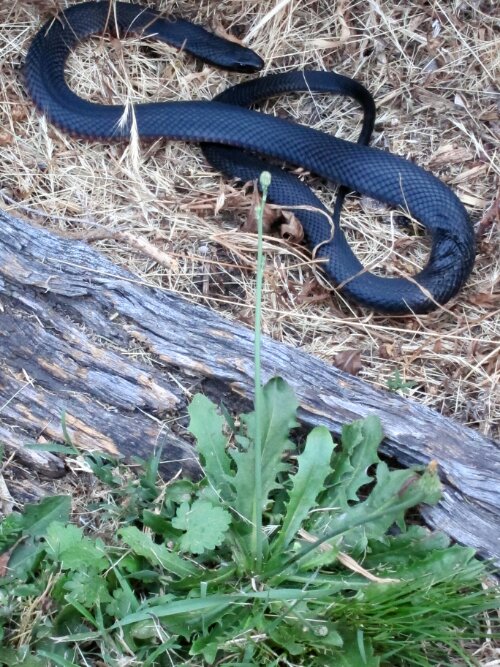 Gustave Courbet found the wherewithal to paint the actual and imagined figures who populated his studio. They represent on the whole what is called the artist’s ‘public’. Not just an audience but also those whose opinion and experience form a context for the work. 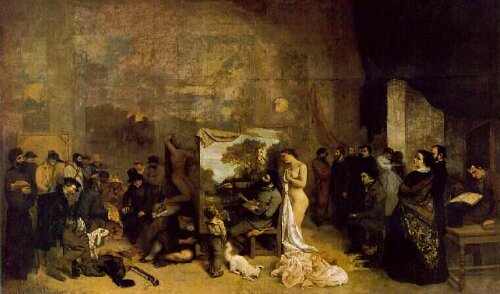 This painting isn’t composed with the kind of focus we usually expect in a depiction of a situation, most figures are busy in some interiorized or intimate activity, but formed into two groupings either side of the artist’s ‘act of creation’ central to the painting.

Interpretations of this painting usually skew to a polarity between academia, represented by the nude model, and reality, as seen in the unfocused arrangements of figures. But given the probing character Courbet extended into his milieu I think the secular and the religious presented here in realism and allegory were a more compelling binary. In the 1850s these social poles were in full dispute as they are now but with very different directions of ascendancy.  Its language is in the shadows. 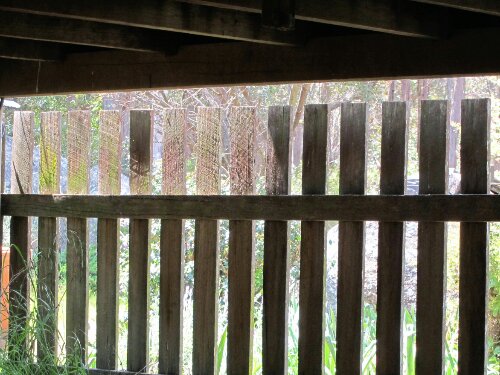 I register an equivalence within a scene, a greyness, a low light taking circuitous routes. The eye’s visual receptors are most attentive to the orange, yellow, green part of the spectrum, they’re tuned and can see flecked faces and figures, landscapes and horizons deep in the shadows. Such colour makes tone sing.

An isolated summer day last week when hot winds blew gusting like a closeby breath, then evenings wrapping one in a warm breeze encased in cool air, the huge pant of a dog in a cold room.

I'm drawn to the crowd and the culture it foments.
View all posts by nameerdavis →
This entry was posted in art, crowd formation, information processes, public space, screenplay and tagged Courbet the painter's studio. Bookmark the permalink.

1 Response to The Painter’s Studio