Posted on February 2, 2014 by nameerdavis

I’ve just finished tutoring a session of twelve hour painting and drawing workshops; with a duration of two to four days these are classes where people meet, needs are gauged and teaching delivered in a compressed time frame.  A retired high school art teacher attending one workshop congratulated the class on the diversity with which each student used the exercises to develop their subjectivity. A little later a tutor from an adjoining class passed through and declared that the easels all spoke Sydney Nolan, an artist whose later work came to represent a pastiche of originality. 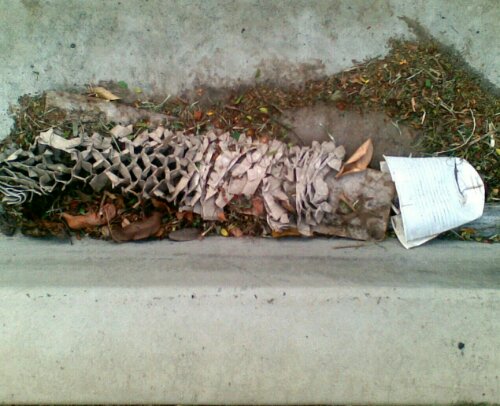 The contrast in these responses reminds me that in painting the exchange between reflective experience and symbolic convention is critical. Claude Lévi-Strauss observed such renovation and abstraction at work in tribal societies which divide their world with a taxonomy that is both symbolic and material. He gives the example of one South Pacific culture whose world was divided into elements that were fresh and those that were decayed, or to reverse the implications of good over bad: the cooked and the raw. 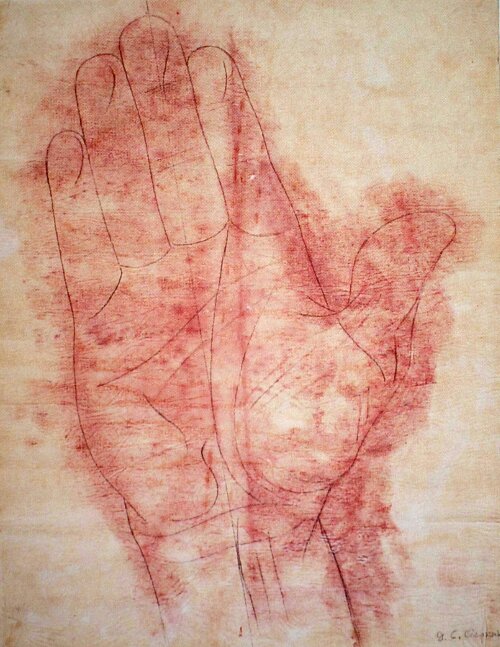 José Orozco, Study of a hand for the Huntingdon Mural 1932

A couple of examples in a modern context of the way the fresh and the decayed can represent a similar reversal are evident in two artists I’ve been looking at recently.

The Mexican muralist José Orozco painted a fresco in the early 1930s at the Huntingdon Library in New Hampshire: The Epic History of American Civilization. It depicts humanity freeing itself from the chains of mechanistic labour. At one stage he depicts knowledge as a skeleton giving birth to bones in jars, with robed skulls looking on.
This arch idealism which is of its time is countered by another artist with an oppositional practice who found less repugnance in the decaying body of his art’s history; James Baldwin wrote:
“You think your pain and your heartbreak are unprecedented in the history of the world, but then you read. It was books that taught me that the things that tormented me the most were the very things that connected me with all the people who were alive, who had ever been alive.”

Baldwin takes heart from the past, but current consciousness is shy of history mainly because of the forms of its remembrance. Born yesterday many things appear new that have always been around, the driverless car for example is merely an accessory for the driverless body which has been wandering the streets for years caught in a warp, remembering itself once remembering its past. 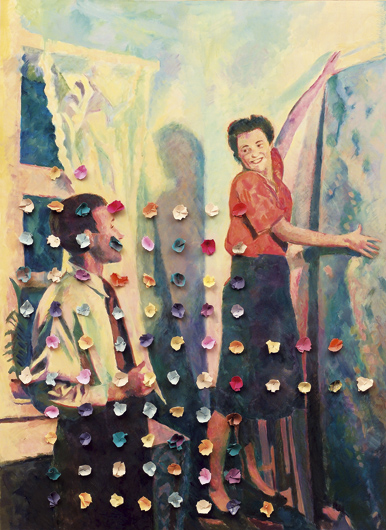 In my painting now, studying the shape of someone’s distant pose in a tiny photographic image, I begin looking for some expression of emotion, a hint that can help take this figure somewhere the last figure didn’t. It’s a funny business, each rendering necessarily ends with a question hanging over it: what part does it play in the composition, in the situation? When it happens the resulting geometry only becomes clear much later, under the gaze: an interplay of figures that are effortlessly drawn into the viewers space. In the end it isn’t emotion that finds expression, but action, figures acting on each other in the surface weave

I'm drawn to the crowd and the culture it foments.
View all posts by nameerdavis →
This entry was posted in art, crowd formation, information processes, public space and tagged Ilya and Emilia Kabakov, James Baldwin, José Orozco. Bookmark the permalink.