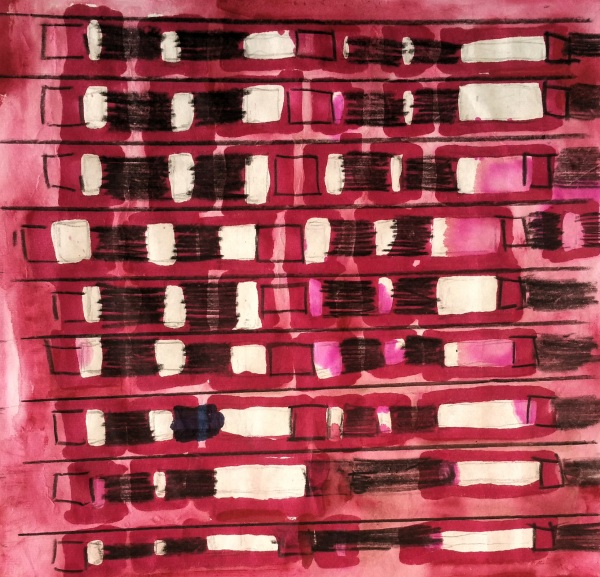 I’m reading Rilke, his view of a renaissance portrait brings attention to the background in which people may be seen traversing little roads and bridges. They exist in the back of the mind attending to the fine work of relationships.

The landscape, its character is never the same from country to country even though on the surface much is similar, the roads are paved or not, bridges are practically built where necessary and people at a distance claim pride of place. 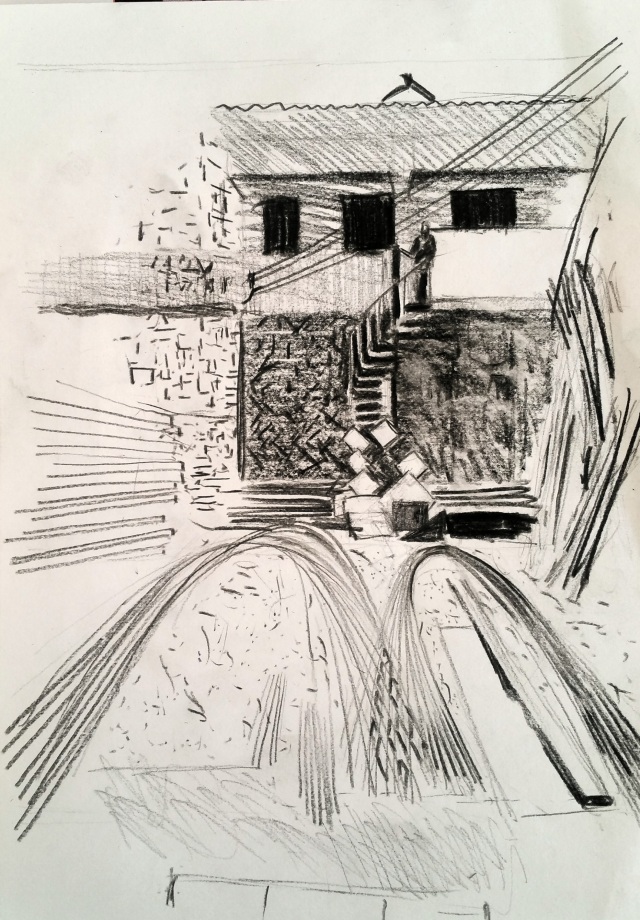 Driving in a wildlife park is witness to life in the wild, a strange experience of background, or distance activity, of relationships forged between a Giraffe and a tree, Gazelles and a stand of grass , a slinking Lion and a ditch.

You could develop it and feel some intent disclosed between the Lion and the Gazelle, the Hyena and any animal’s home or prey, a Kite and a rodent (or as happened, a Black Kite and a chicken leg held then taken from my lunch companion’s hand).

Typically seen in Middle distance, an animal has a signal character, a sleeping lion is an undulating yellow line, while a hyena leaves a shadowy patch within the grain of the grass. Our guide, D has this visual knowledge and I try to gain it drawing from the car each time he stops. Of the two undulating curves, one morphs into a male lion and lopes over jumping onto the other. D says they’re brothers, the playful act like a reality show whose screen keeps freezing into the deadpan slo-mo flatness of The Real: the all encompassing category of food is a matter of perspective.

Pulls my mind back to the conductor on a long distance bus who barked give me ten dollars, at that moment I was leaving the relative safety of a 6 hour bus seat, feeling like a piece of cargo changing hands, I’m bewildered, he looks at me and laughs. The traveller at these times is on one of many alternate menus being written by natural selection.

Reverse to the minibus 6am that morning, I’d been sick the previous day and night with stomach cramps and a fever, by morning I could travel and with a seat up the back where I could see the whole interior I took my attention from my body and the bone rattle of the slow mountain road to patterns worn by the women bound for market or the children’s clinic:
Printed large black diamond net lines over yellow moving to pink cut by large slashes of a black shawl.
Sequined purple head scarf. Blouse of a printed organic curving (seed?) pattern in yellow, red and black. Sarong of a woven cloth with complex rhythm of horizontal bands in red black and white.
Yellow blouse with occasional printed large pink hibiscus flowers.
Printed geometric black line of crossed circles over yellow.
Crocheted pink hair band, viridian blouse.
Tiger skin printed velvet blouse.
Cut out like this we’re distracted from the bodily movement that bring them alive. Like a zebra’s markings which a stencil can’t carry off, wearing pattern comprises relations between the rhythmic surface of a decorative motif, its surface geometry and the body that floats it creating a spatial figure that’s both sensual and actual.

Further to this, Massai children run with the car demanding chupa. What’s chupa we ask the driver, bottle. Down the road other children run sporting light blue arm bands. You see what they do, they take the label to decorate themselves and throw away the bottle.

Light blue and black segmented lines flash reflections in the side mirror speeding down the dirt road.

I'm drawn to the crowd and the culture it foments.
View all posts by nameerdavis →
This entry was posted in crowd formation. Bookmark the permalink.

2 Responses to Roads and Bridges